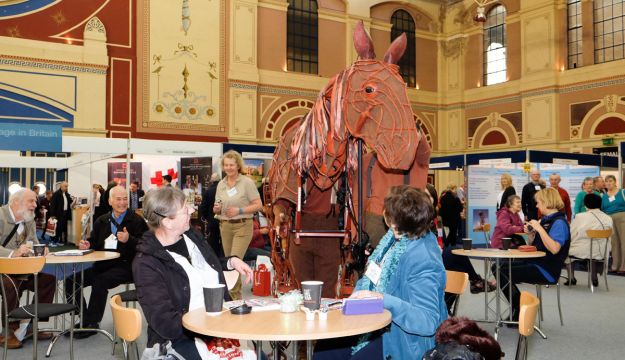 Joey from War Horse in action at Excursions

Entrepreneurial coach tour operators increased their share of business from theatre groups in 2014 by adding more attractions to their packages according to the latest figures from Encore Tickets.

In what was a flat year for London theatre bookings generally, with business overall only rising by 1%, Encore Tickets, the capital’s largest theatre and attraction ticket supplier, was able to buck the trend and increase sales by 15 percent (thanks to imaginative growth from coach tour operators.

Said Encore Head of Sales Jo Bachelor: “It was very encouraging to see a considerable number of coach tour operators expanding their London packages by adding value with many different attractions – from afternoon tea to a Warner Bros Studio Tour.

“Thinking outside the box will certainly have increased profits for those who offering more imaginative group tours, but also helped us increase ticket sales in an otherwise slow market”.

In addition, Encore’s review of 2014 shows that, late on in the year, a number of operators who had previously stopped running London West End tours re-introduced the packages for the Autumn and Winter season. One aspect of domestic theatre business that did run true to form was the home market’s love of classic West End shows with the top six being:

In the international market Encore’s figures show that American visitors to London were top of the pops for Encore Tickets in 2014, buying more theatre and attraction tickets than any other nationality.

Added Jo Bachelor: “New technology also helped us increase our sales through box offices in 2014 with the implementation of direct connectivity to their systems. With this, we have increased our access to ticket stock even further ; a feature which benefits all our partners.”

All enquiries should go through to Encore’s Groups Team via:-