Animal Park Roars Back to The BBC This Summer 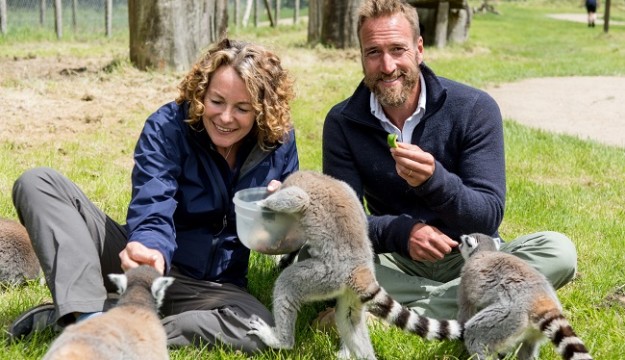 TV presenters Ben Fogle and Kate Humble are joining Jean Johansson for another dramatic and heart-warming glimpse into life behind the scenes at Longleat in a new series of Animal Park.

Scheduled to be broadcast on BBC One over a three week block, the new ‘Summer Specials’ series will feature 15, 45-minute episodes offering viewers a privileged peek behind the scenes as Longleat’s keepers and animals prepare for another long hot summer.

Among the stories featured in the new series is the unexpected arrival of a new cheetah cub and an abandoned baby wallaby which needs to be hand-reared by its keeper.

There will also be a special tribute to Nico – one of the world’s oldest male gorillas – whose death earlier this year hit keepers particularly hard.

Kate Humble said: “Every year I look forward to returning to Animal Park. The animals and many of the people who work there have become like family over the many years I have worked there, and our annual reunion is always a highlight.”

Ben Fogle added “I’m so thrilled to return to Longleat for the latest series of Animal Park. The feeling of excitement I get walking through the gates has never left me and I can’t wait to see some familiar faces.”

BBC Commissioning Editor, Lindsay Bradbury said: “Animal Park has proved itself to be a big hit for our audience. The mix of emotions of the births and deaths at the Park, plus the chance to see animals up close and personal is a winning combination.”

In 2017 The Animal Park: Summer Specials was received by a very keen audience, with an average audience of 1.53 million viewers and a 27.1% market share (+8% above BBC1’s slot average and +23% above the all day average).