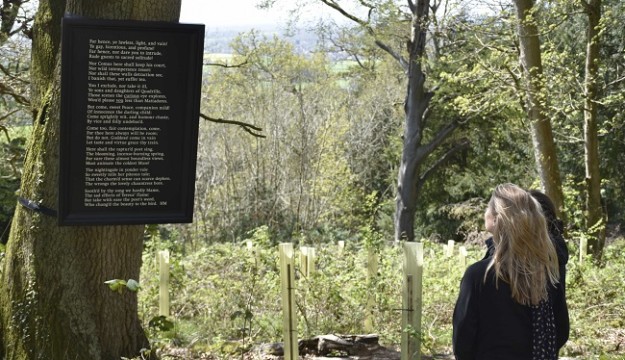 The Victorian estate of Tyntesfield, near Bristol cared for by conservation charity- the National Trust, has announced this month that Bristol-based poet, Holly Corfield Carr, will be joining the estate as poet-in-residence.

Holly, who has previously held residencies at The Wordsworth Trust and the University of Bristol amongst others, has been named as poet-in-residence at Tyntesfield as part of a project inspired by eighteenth-century Bristol poet, Hannah More. During her residency Holly will be hosting a series of woodland writing workshops in Tyntesfield’s woodland, and has produced a sequence of new poems in response to Hannah More’s poetry and the landscape that inspired her.

Bristol-born Hannah More (1745-1833) was one of the most influential women of her day. A successful poet, playwright and campaigner, she was a champion of social reform, female education and the abolition of slavery. For six years she spent much of her time on Tyntesfield’s neighbouring estate Belmont (now privately owned and not open to the public) through her relationship with the owner, William Turner. She was inspired to write poetry by the sheer beauty of her surroundings.

‘It’s wonderful to think that the natural beauty of the woodland was a crucial source of inspiration for one of Bristol’s greatest writers’, says Tyntesfield curator, Sue Hayward, ‘and we’re delighted to welcome Holly, a Bristol based writer herself, to rediscoverthe poetry of the landscape and explore Hannah’s legacy. ’

Hannah More’s relationship with William Turner eventually ended in heartbreak. After postponing their wedding three times Turner eventually broke off their engagement. In compensation, Turner offered More £200 a year, an offer which More initially refused but later accepted. It was this income that allowed More to be independent (at a time when women rarely were) and left her free to focus on advancing her literary career and enter London’s exclusive literary circles.

‘More’s feminist legacy is complicated, and the opportunity to work with her poetry was both thrilling and troubling,’ reflects Holly Corfield Carr, ‘while she set up schools for girls across Bristol and campaigned for improvements and access to women’s education throughout her life, she celebrated women’s power as a limited and very local thing.’ Throughout her residency, Holly will explore what it meant to be a ‘woman writing in the woodland’ in More’s time and what that means for female writers today.

Responding to More’s idea that a woman might see the world from ‘a little elevation in her own garden’, Corfield Carr’s work at Tyntesfield this summer will explore More’s dedication to the local landscape and consider what this means for feminists, environmentalists and poets.

‘My work at Tyntesfield this summer explores More’s ‘little elevation’ as the ideal position, a place in which we prioritise expertise, cooperation and care,’ explains Holly Corfield Carr, ‘and as part of this I have produced a book of poems, Indifferent Cresses, which takes its name from Hannah More’s complaint that women’s writing is sometimes as celebrated as a salad.’

Holly Corfield Carr took her inspiration for Indifferent Cresses from the Victorian books, British Grasses and Wildflowers and Their Teachings, both purchased by the Gibbs family shortly after their arrival at Tyntesfield and still found in the Tyntesfield library today. Indifferent Cresses replicates the style of the Victorian ‘herbarium’ by featuring a combination of poems, field notes and pressed natural material found in the woodland at Tyntesfield.

Alongside Indifferent Cresses, which was written onsite in the woods at Tyntesfield and is published by the National Trust, Holly will be leading writing workshops across the summer with guest writers – critic, Srishti Krishnamoorthy-Cavell; poet, Elizabeth Jane-Burnett and novelist, Abi Andrews – to explore how we can read and write outdoors and engage with our most local landscapes. Copies of Indifferent Cresses will be given to participants of the workshops and are also being distributed to schools across Bristol in the spirit of Hannah More’s commitment to education for women and girls in the city.

‘I’m so excited to be able to invite – and elevate! – some of my favourite readers and writers and the students of Hannah More Primary School to join me in the woods to read and write onsite at Tyntesfield, performing what Hannah More might have recognised as a ‘root house’ of new writing from the woodland floor.’

Sixty pupils of the Hannah More Primary School were invited to create handkerchiefs dyed with flowers and write their own poems inspired by the colours and sounds of the woodland at Tyntesfield. The students will also have the opportunity to invite their family back to Tyntesfield for a free community day, to see the setting where they wrote their poetry. Holly’s residency will end with a special Little Elevations event on National Poetry Day, 4 October, at Spike Island in Bristol. Tickets for this event will be available directly through Spike Island from August.

Alongside Holly’s residency, and as part of the National Trust’s 2018 ‘Women and Power’ programme, a new self-led poetry walk inspired by Hannah More, launched at Tyntesfield last month. During More’s courtship with William Turner, he installed wooden boards of her poetry across the estate, remnants of which were discovered and then re-instated by the Gibbs family when they moved to Tyntesfield in 1844. It is these boards that the National Trust team at Tyntesfield have replicated to form the new poetry walk through the woods at Tyntesfield. Maps are available in the Tyntesfield Ticket Office.