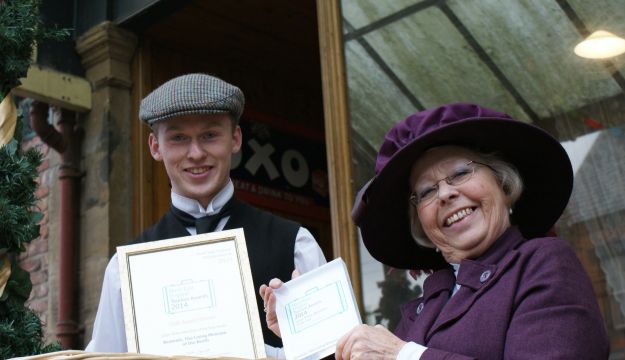 Beamish is celebrating after being named Large Visitor Attraction of the Year at the region’s “tourism Oscars”.   The Museum won a Gold Award at the North East England Tourism Awards 2014 at Sunderland’s Stadium of Light on 11th November 2014.

Richard Evans, Beamish’s Director, said: “It’s fantastic to receive this award – it’s great recognition for all of the hard work of everyone at Beamish.”

The honour comes at an exciting time for Beamish – a record 589,474 people visited in 2013/14 and 2014/15 is on course to top that figure.  The Museum has ambitious plans to build a 1950s Town and Upland Farm, and a Georgian Coaching Inn, in a project that has received initial support for a £10.75million grant from the Heritage Lottery Fund.

Richard added: “As we move forward over the next 10 years, we hope to achieve even more and attract even more visitors to the North East.”

Councillor Carl Marshall, Chairman of Beamish’s Board, said: “This award is a tribute everyone at the Museum – the staff, volunteers and trustees, and everybody who has been involved, over the last few years, in making Beamish the place it is today.

“It’s great to be recognised for the work we are doing to support tourism across the region and hopefully, with the Heritage Lottery Fund project, we can build on those achievements to help bring more visitors to the North East from around the country and around the world.”

The North East England Tourism Awards 2014, which were presented by BBC Look North’s Carol Malia, honoured the best of the region’s visitor attractions and tourism businesses. Gold, silver and bronze and highly commended awards were given out in 15 categories.  Winners at the regional awards have the chance to compete nationally at VisitEngland’s Excellence Awards 2015.

Rhiannon Hiles, Beamish’s Deputy Director, said: “I’m elated to have won this award. I’m really, really pleased for our staff and volunteers. It’s amazing recognition for all of the hard work everyone puts in to making Beamish a really special place for visitors.”

The North East England Tourism Awards are organised on behalf of the Northern Tourism Alliance by NewcastleGateshead Initiative. Chief Executive, Sarah Stewart, said: “My congratulations to tonight’s winners, their commitment to excellence ensures the industry continues to go from strength-to-strength.”

For more information on the attraction visit http://www.beamish.org.uk/