The Birth of a Mammoth Steaming Cornish Mining Giant 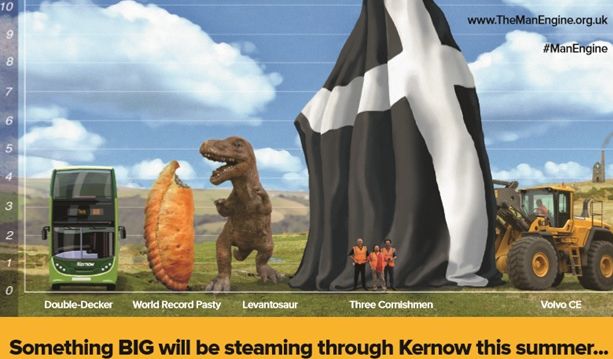 To celebrate the 10th anniversary of the Cornwall and West Devon Mining Landscape being added to the UNESCO list of World Heritage Sites, the Cornish Mining World Heritage Site Partnership has commissioned an exciting summer-long set of inspirational events and experiential happenings entitled Tinth.

Listed in the Guardian’s article ‘Where to go on holiday’ in 2016 and selected by The Telegraph as one of the ten reasons to visit Cornwall in 2016, the key commission sees the creation of the Man Engine, a 10 metre plus high steaming giant who will quite literally crawl the length of the Cornish Mining Landscape over the course of two weeks from the 25th July to the 6th August 2016.

The largest mechanical puppet ever made in Britain, the awe-inspiring ‘Cornish Miner’ will be the same height as a double decker bus when crawling, increasing to almost three times that height when stood up. Throughout its journey the Man Engine will be accompanied by more than a dozen ‘miners’ and ‘bal-maidens’ who will animate the giant throughout his travels.

From 25th July to 6th August the colossal Man Engine will make its journey from Tavistock to Geevor Tin Mine. Along closed Cornish lanes and roads and through Poldark country, the Man Engine will literally walk and crawl through each one of the ten World Heritage Site mining areas. To find out exactly what’s happening at each of the ten stops and learn where you can see this truly amazing visual spectacle, visit http://www.themanengine.org.uk and immerse yourself in the Man Engine world with a bespoke interactive map.

At a number of Cornish mining locations, the Man Engine and his cavalcade will be greeted by a set of pre-planned ceremonies, events and locally-flavoured celebrations.  Ancient mining chimneystacks will be smoking once again, traction engines will be in full steam, choirs will be in full voice and brass bands, schoolchildren, bal maidens and miners will all be present, as they observe and experience their own area’s history and significance within the World Heritage Site.

Starting in Tavistock at 10am on the 25th July, this truly monumental feat of engineering will provide an experience like no other, drawing huge crowds of the general public and media alike. Commissioned by the World Heritage Site Partnership, the Man Engine is going to be developed and fabricated at a top secret location by Golden Tree Productions.