A bit of Egg-citement during lockdown 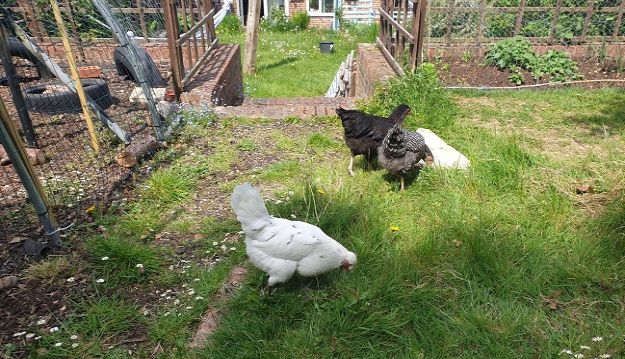 Employees of Reading Buses who are currently on furlough have been actively engaged in new ways of staying occupied – and even egg-cited.

Commercial Systems and Projects Manager Simon Gold, 33, from Overdown Road, Tilehurst, has been having an egg-stremely interesting time during the lockdown. He decided to acquire some chickens.

Egged on by his wife Tamsin, they shelled out on four hens and are now seeing the fruits of their lay-bour. One of the hens, Babs, has been an egg-laying machine. She has provided Simon and Tamsin with un-ouef for them as she has laid for seven days in a row.

The couple are hopeful that all their hens will start laying soon and they can be self-sufficient for pancakes and scrambled eggs forever. Commercial Contracts Co-ordinator Kerryn Hedley, 35, meanwhile, has been avidly taking part in dog agility training with her pup Rheya.

She says: “In dog agility the weaves are seen as the hardest equipment to teach. During my furlough our youngest dog Rheya was at the right age to learn.“Starting off with just two poles, we added extras in sets of two until we finally got to six poles in a straight line.”

Kerryn, who is from Didcot, added: “It is unlikely we will be able to compete this year, which would have been Rheya’s first year, but there will be no excuse not to be ready next summer.”

It’s also been a good time for driver Paul Barker to practice his amateur photography. Paul, 53 has worked for the company for nearly five years, although he has been in the industry for 32 years. Paul lives in Warfield, Bracknell, where he has his home studio in which he has been trying out new skills and techniques.

Said Paul: “I’m a very keen on amateur photography which is one of my hobbies, Although not on furlough, I’ve had a lot more time to learn more about lighting using my home studio. I’ve been experimenting with the use of light and shade with model ships, paintings and other such material.”

The company have been helping keep everyone inspired by sharing the stories of those with new hobbies, pets or just pointing employees to free resources in their weekly employee newsletter.

The Charlecote Pheasant Hotel Is Acquired by Vine Hotels

Second Acklams Coach on its way to West Africa to “Light Gloomy...