What did The Butler See? 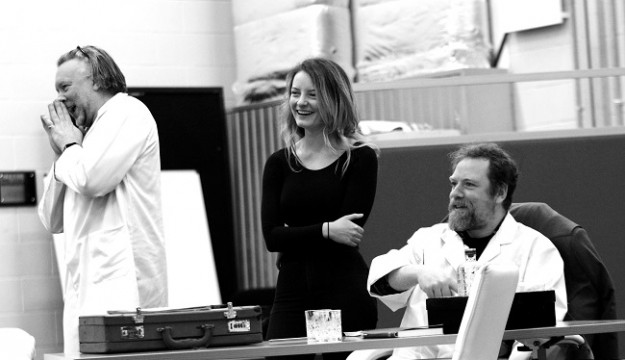 Stand-up comedian, panelist, presenter and actor Rufus Hound comes to Curve in what is regarded as Joe Orton’s finest play.

What The Butler Saw, which runs at the Leicester theatre from the 3rd to the 18th March, tells the story of Dr. Prentice, a psychiatric in an private clinic who, whilst attempting to seduce the new secretary he is interviewing, is interrupted by his wife, her lover, a government inspector and a policeman on the hunt for a certain missing part of Winston Churchill.

What the Butler Saw appalled and enraged certain audiences with its blatant sexual overtones, attacks on authority and conventional morality. We chat to Rufus to see if the work of Leicester’s most famous playwright has as much satirical bite in fifty years after the death of its writer. 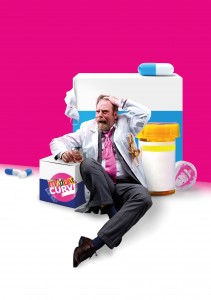 You started your career working in PR, how did you make the move into stand up?

Well the two weren’t linked!  I left school, didn’t go to university and I had a summer job working for a PR agency and one of the people from the agency recommended that I should consider a career in the industry as I was pretty good at it. So that’s what I decided to go off and do. By that point though the performing bug within me was deep set and stand up as a way to scratch the performing itch. So while I was doing PR in the day I would be doing stand-up in the evenings.

You carry with you an anarchic air, is Rufus Hound a character? Do you take off the beard as you close the front door and drop the one liners in the draw until the next day?

No I don’t.  Unfortunately for all concerned that is what I’m like! The problem that everyone who knows me has to face is that this is what I’m like all the time. I’m as sick of it as they are!

Your career has evolved from stand up, to panel shows, to presenting and to acting both on screen and in the theatre. Was there ever a strategy to this or did things just fall into place naturally?

I think naturally is a bit of an over statement- it’s not natural. There’s a series of things you would like to do and at any given point you take stock and see where you’re at where you think you can get to. Certainly there was never a plan, but there were opportunities and I took those opportunities. Fortunately I kept being given opportunities because, having taken the original attempts seriously enough, I showed that I was a prospect worth backing.

You seem to have been focusing more on stage work of late, has that been a conscious decision?

I haven’t really been focusing on it, it’s just that I completely adore it and if you’re going to do stage work you’re tied in for lengthy periods to do nothing but it! I’ve had the chance to do other things and I’ve slotted in a few other bits and pieces around the side but it’s just more that I love it. It’s absolutely what I want to be doing to earn a living.

What is that you find exciting about working on the stage?

I think there’s something really primitive about people telling stories to people in the same point of space and time. I mean it goes all the way back to sitting around camp fires. I did some leafletting for different political causes and when you present people with facts they just agree with the ones that they agree with and tell you you’re wrong when you present them with facts that they don’t agree with. So I realise at that stage that if you want to change the world, you have to change people’s hearts and the only way you do that is by giving them a story they feel connected to. By that point I wanted to tell stories more than I wanted to present facts -or just shout facts at people which was largely what my stand up had become!

Have you worked in Leicester before?

How familiar are you with the work of Joe Orton?

Well before I took the job I understood his place in the pantheon of British playwrights but I didn’t really know a great deal about him or his work. One of the huge joys I’ve had is being given a reason to find out more about the man who I think was the father of punk. He was prepared to do things in his own way and on his own terms. If that meant living on next to nothing and a life of poverty then so be it. It wasn’t about compromising. He wanted to work and he wanted it to go well but not by selling himself out and that is the mark of a true artist in many ways.

What do I think it is about his writing that makes him so unique?

I think now you could argue it might be less unique because people’s understanding of the mechanics of shock is such that you’ll see many imitators. I think what makes him truly remarkable is not only what he was doing but the point in time at which he was doing it. He has written the most spectacularly outrageous things at a time when other play writers were still worried about seeming unseemly. How could you fail to have respect for anybody that committed to banging the drum for social change?

Do you think farce is a very British thing?

I don’t know.  I don’t see any reason it should be specifically British but for whatever reason it is.  I think that brits have a love of hubris, word play and schadenfreude. Farce connects all of those things and therefore it is sort of a favourite. I think we love to see people panicked and stressed out because it makes us feel like thank god we’re not the only ones.

Tell us about Doctor Prentice. What attracted you to the role?

It was a chance to play somebody that I don’t think I would naturally be chosen to play. Doctor Prentice runs a Psychiatrists Practice which, at the time that Orton wrote this, was still viewed as relatively new science and only for people with genuine large scale mental problems. He makes a semi forgivable mistake at the beginning of his work day and the ramifications of this, as he desperately tries to cover his own backside, means that he just falls further and further apart. I think that showing that the foibles of middle aged men are often made worse by the refusal to come clean is probably a story that should be resonating rather hard in these days of Trump and Brexit.

Do you have any similarities with Prentice?

Well hopefully none! I try to live my life in way that means that he and I would have very little in common. He’s rather stiff and uptight. His biggest concern is his reputation at the exclusion of actually doing the right thing in the first place. I rather try and avoid that but I think he’s somebody whose own feelings about how loved or how needed he is are incredible complicated. I think we probably all have a bit of that, especially people who have been married for a long time.

What The Butler Saw is very frank and open about sex, desire and voyeurism, especially when you consider it was written 50 years ago. Do you think it still speaks to today’s saucy snapchat sending society?

I don’t think it does really resonate in quiet the same way but at the same time what Orton wrote is genuinely really repellent. There are so many complex references that Orton uses in this play. It’s a mixture of Carry On, Noel Coward and Theatre of Cruelty so getting the tone of it right is incredibly hard. I think we are still moralistic in our relationship with sex; we have a kind of sneery, like ‘oh how dare they’ attitude towards sex but I think for a younger generation that seems to be largely changing.

Does work like What the Butler Saw help to combat that?

Well hopefully. Maybe there are people who will come to see this who feel that the youth of today are spiralling out of control and they are asked to reflect on the fact that a man in his twenties in 1969 wrote as filthy as piece of theatre as I think anyone would be capable of coming out with today. Maybe what it does is bang the drum for the idea that deep down everyone is driven by the same mammalian instincts and all that changes are the tightness of the trousers that people are wearing as they give in to them.