Four decades of looking after groups is to be celebrated during 2019 when one of the UK’s top hotel and holiday companies celebrates its 40th anniversary.

Daish’s Holidays was created by owner Jeannie Wilson in 1979 when she purchased her first hotel – a landmark hotel that gave the company its name – Daish’s Hotel in Shanklin, Isle of Wight. 40 years later and Daish’s have 8 hotels in 7 popular tourist destinations across the country. They also operate 23 luxury coaches to take their customers on highly enjoyable group tours.

Now, they’ve announced a special 40th Anniversary Daish’s Celebration Showcase to take place 2-6 October 2019 based at the original Daish’s Hotel right in the heart of Shanklin.

Working closely with group travel specialists Steve Reed Tourism Ltd of Hampshire, GTOS and coach and tour operators are being invited to sign up for this event before places run out.

The event involves a 4 night DBB stay in Daish’s Hotel with fam’ visits to some of the top IOW group attractions including Carisbrooke Castle, Osborne House, the Isle of Wight Railway and several other attractions on the holiday island. The Celebration Showcase also includes return travel with a car on-board Wightlink Ferries.

Daish’s Holidays have eight hotels in seven seaside resorts across England: The Prince Regent and Russell Hotels in Weymouth; The Sands Hotel in Bournemouth; the Claremont Hotel in Eastbourne; 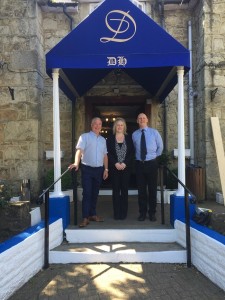 the Devonshire Hotel in Torquay; Barrowfields Hotel in Newquay, Daish’s Hotel in Shanklin, Isle of Wight and, most recently acquired, in Llandudno North Wales, the Somerset Hotel. To view more on the Hotels please visit www.daishs.com

Martin Jenkins is the Groups and Travel Trade Manager for Daish’s Holidays:

‘We’re really looking forward to celebrating in some style with GTOS when they arrive at Daish’s Hotel in Shanklin,’ says Martin. ‘Daish’s Hotel – which has recently had a £1.5m refurbishment – was Mrs Wilson’s first acquisition back in 1979 and it has proved to be a wonderful hotel ever since, providing many happy memories for generations of group travellers.’

Any tour planner wishing to book their places on the Daish’s Holidays 40th Anniversary Celebration Showcase should email  steve@stevereedtourism.co.uk or telephone [01420] 560288