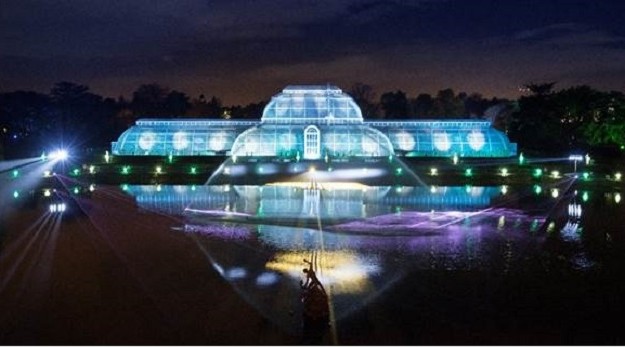 This winter, the Royal Botanic Gardens, Kew will transform into an enchanted winter wonderland as the much anticipated Christmas at Kew returns once again. After the staggering success of the last four years, Kew has once again teamed up with entertainment promoter Raymond Gubbay Ltd to create a brand new illuminated trail around the Gardens with over 1 million twinkling lights.

As they embark on the trail, visitors can expect a magical world that will fill hearts with seasonal cheer. The festive adventure will begin with a path lit by hundreds of illuminated globes winding through glittering trees dripping with silvery shards of light, snowflakes and stars. Children and adults alike will delight at the enthralling sound of a chorus of Singing Trees as they head towards perhaps one of Kew’s most stunning attractions, its glistening lake. Visitors will witness an ethereal underwater display of glowing lights as they stroll over the famous ‘Sackler Crossing’ bridge.

The trail will feature many brand new and utterly unique installations; an ephemeral walkway of giant bubbles, clusters of trees wrapped in ever-changing ribbons of light and a majestic weeping beech tree positively dripping with sparkling lights.Visitors will get the chance to warm up in the heat of the Fire Garden which will this year form a striking corridor of festive flames and rotating Christmas trees. Also along the trail, visitors will encounter the amazing ‘Play Me Light Me’ musical installation, with giant light-up piano keys.

The Great Broad Walk Borders, the world’s longest double herbaceous border, will for the first time form part of the trail and will be magically transformed by hundreds of shining petals and gigantic flower pots.

Of course, it wouldn’t be Christmas at Kew without the show-stopping Palm House finale. The pond and magnificent glasshouse will spring to life with an explosion of colourful criss-crossing laser beams, jumping jets of light, and new for 2017, kaleidoscopic projections playing across a giant water screen.

Youngsters will delight in spotting Santa and his elves performing panto along the trail, and White Peaks will once again become a festival fairground with a Victorian carousel and helter skelter rides for the little ones. As the winter trail comes to an end, visitors will be greeted by the scent of mulled wine, mince pies and other festive foods from a variety of enticing stalls at Victoria Plaza.

Sandra Botterell, Director of Marketing and Commercial Enterprise says “Now in its fifth year, Christmas at Kew has become an integral part of the London festive calendar.  It’s not often that you get to experience the sight of one million lights after dark within a world famous botanic garden. This year’s night-time extravaganza will once again truly inspire the Christmas spirit in visitors young and old.”