Discover the Holy Island of Lindisfarne… and walk in the footsteps of ancient monks! 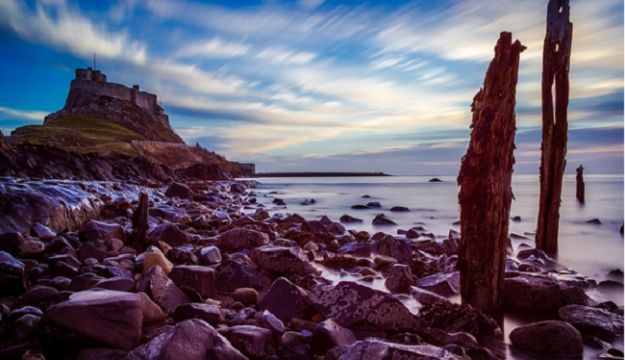 Explore the stunning scenery and magic of Holy Island.

The Holy Island of Lindisfarne is a coastal island, home to a small population of 160 people, yet the island attracts over half a million tourists every year.

The island is other-worldly, only accessible during certain times by a singular causeway – covered by the crashing waves of the North Sea twice a day.

Surrounded by myths, stories and historical contradictions. Walk in the footsteps of ancient monks and Viking raiders. With several attractions to discover including a monastery, castle and nature reserve.

A Christian pilgrimage spot, the monastery has existed here since 635AD. Lindisfarne Priory was originally founded by St Aiden but is recognised for the residency of St Cuthbert. The monastery is the birthplace of the Lindisfarne Gospels.

Lindisfarne Castle is unmissable. Proudly residing on top of an old volcano, built to defend the Scottish attack in the 1500s. The fortress is visible for miles around and is one of the iconic features of Northumberland.

The dramatic island demonstrates the ongoing battle between man and nature – from historical buildings to Lindisfarne National Nature Reserve, internationally recognised as the home of wintering birds from the Arctic Circle.

To fully immerse yourself in the culture of Lindisfarne visit St Aidan’s Winery where you can taste Lindisfarne Mead, a local delicacy. The honey wine was originally brewed by the Lindisfarne Monks – Made from honey and the pure water of the island’s artisan the drink is a known aphrodisiac.

If you would like to travel to the Holy Island of Lindisfarne the next Enterprise Travel coach trip is Sunday 22nd September.