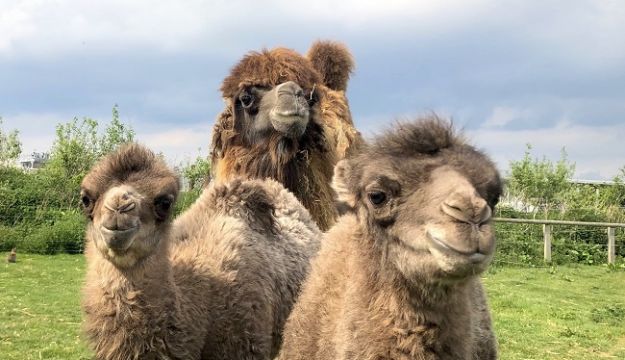 Life continues behind closed doors at Yorkshire Wildlife Park in Doncaster, where staff in lockdown are celebrating a double arrival -  the birth of two Bactrian camel calves.

The calves were born only days apart  in April and are sure to be favourites with visitors when the park reopens.

They have now made their debut out into the main reserve with the camel herd after spending their early days in the Camel house and in a nursery area. The Park has had previous success with breeding camels but these are the first calves to be born at the Park who have never seen a visitor, so it will be a surprise for them when the Park reopens.

The first baby calf, Marvin, arrived on the 10th of April to parents Elizabeth and Baxter. He is settling in very well and initially was wobbly on his feet but continues to go from strength to strength . The new-born is becoming more inquisitive and eager to meet the other four generations of camels living at the Park. Elizabeth is 7 years old and Baxter who is the father of both calves is 16 years old.

On the 23rd April,  mum Darcey also gave birth to a male calf. Named Merlin by the rangers, he was born in around 20 minutes and was on his feet within an hour. Merlin is darker in colour than Marvin but the two are becoming firm friends as they explore the extensive camel reserve together.

“Both of the new calves are males and seem to be having the best time ever, enjoying the sun, bonding with their mothers, and getting to know the rest of the herd” said Ayshea Seston, the Hoofstock Team Leader.

“Bactrian camels are very family-oriented animals with strong bonds within the herd. It is clear that they are all delighted with the new additions and so are we.  The gestation period is 13 months and the calves stay with their mothers for a long time. Generally they are weaned at about 1 -2 years old and then they will stay with their mother until they are mature which is about 3-4 years for females and 5-6 years for males.

“It is great to have new babies here at the park. They create so much joy among the animals and the rangers especially during such uncertain times. “The weather during April has been amazing and at this time of year the park would normally be booming with visitors. The children love to see the baby animals, but it’s all strangely quiet this year due to the temporary closure of the park.

“We hope to have the park back open to visitors soon but in the meantime we need to keep each other safe. The baby camels and parents will be well looked after and are excited to meet you all.”

The camels are well adapted to living in one of the harshest environments on earth – surviving extreme temperatures of over 38 degrees in summer and below minus 20 degrees in the winter. They grow thick winter coats to survive winter temperatures then shed them for warmer summer conditions. They have also evolved to deal with sandstorms – they have an extra row of eyelashes and a third transparent eyelid to protect their eyes from sand.

They are incredibly resilient and camels in the Gashun Gobi even survived 45 years of nuclear testing by the Chinese in the region.  They can go for a long time without water but then a thirsty camel can drink up to 135 litres in under 15 minutes. It is a fallacy that their hump contains water, though. The two humps of the Bactrian camel are actually fat. They are long lived – up to 50 years of age, but on average they will live until 30-40 years of age.

Wild Bactrian camels are endangered in their native habitat of the deserts of Mongolia and China. Numbers have dropped here to around 1,400. In the wild they live in herds of six to 22 animals. The biggest threats to wild camels are hunting, habitat loss, competition for grazing from other livestock and illegal mining activities.

The Yorkshire Wildlife Park Foundation, which is based at YWP, is busy fundraising to support work by the Wild Camel Foundation and also funds an education centre for the local community to learn about these amazingly resilient animals and why they should help protect them. The Foundation has also previously granted funds for the release of camels bred at the special breeding centre in Mongolia back into the wild.

More information available on the Park at www.yorkshirewildlifepark.com