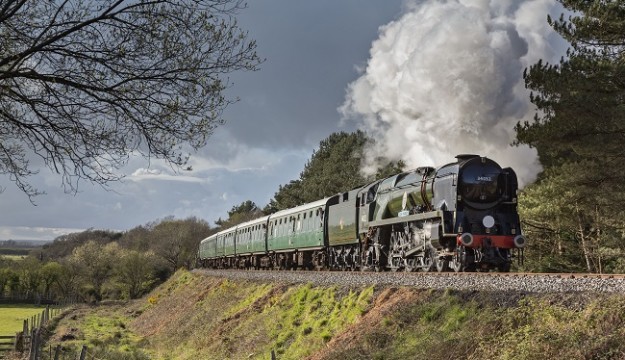 An express steam locomotive from the great days of steam, will be working trains on the West Somerset Railway on selected dates in August and September.

The locomotive will also feature in the WSR’s Autumn Steam Gala at the end of September.

In addition, it is currently in the guise of 34052 ‘Lord Dowding’, named after Air Marshall Sir Hugh Dowding, commander of Fighter Command during the Battle of Britain. This is particularly appropriate in this centenary year of the Royal Air Force, although the engine is correctly identified as classmate 34046 ‘Braunton’ (the original 34052 was scrapped in the 1960’s). ‘Braunton’ was built at Brighton in 1946 as one of Oliver Bulleid’s ‘Light Pacifics’ for the Southern Railway. It was extensively rebuilt in 1959 and was withdrawn in the general run down of steam in the 1960’s. Its first return to working life from scrapyard condition, followed after work was carried out by West Somerset Restoration at Williton. Today it is part of the Icons of Steam fleet and is based at Crewe, from where it operates on mainline steam excursion trains.

During August the locomotive will work the following trains:

Dates and times for September operations will be available at a later date. On arrival at Minehead, (due there at 12.47) the locomotive will be turned on the turntable.

“ we are very excited to welcome this Steam Locomotive back to the WSR ,to help run our busy Summer services,

Our Steam Crews and Passengers will enjoy seeing her haul trains along our Glorious Coast and Countryside line, throughout August and September”

During August two other steam engines will also be in action each day as well as a diesel train.

Full timetable details can be seen at www.west-somerset-railway.co.uk or obtained from 01643 704996. Timetable leaflets can be obtained from Tourist Information Centres.