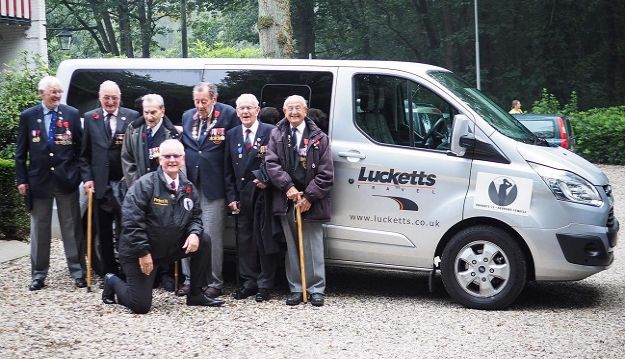 The company, based in Fareham, provided a group of veterans with a mini bus so they could visit Arnhem for the 73rd anniversary of Operation Market Garden.

Operation Market Garden was a major airborne operation fought in the Netherlands and Germany in 1944, when allied forces attempted to secure a tactically important part of Europe.

With Lucketts being a strong supporter of the UK’s armed forces community, it donated the use of one of its vehicles to a group of 8 veterans and their carers to allow them to visit the area this September. It was an emotional visit, with some of the party having fought in the area, others close by and many having lost their friends there.

Thanks to Lucketts’ donation, the veterans, all aged in their 90s, were able to visit cemeteries, lay wreaths at the Oosterbeek Memorial Service and put a cross on every unknown grave at Jonkebos CWGC Cemetery, all 199 of them. They also attended the Hartenstein airborne museum, visited Arnhem and Nijmegan bridges and took part in “The Race to the Bridge” in WW2 vehicles.

The veterans, mainly local to the Portsmouth area were Derrick Grubb from Bedhampton who served in the RAF and was shot down in Italy and made a POW, Denis Hosgood from Littlehampton, Queens Own Cameron Highlanders who fought in Normandy and Arnhem and later near Bastogne, Joe Sealey from Burgess Hill who was injured in the Market Garden campaign, Mick Jennings and Ron Smith Royal Navy,  and Bob Gale, also from the Royal Navy, who was awarded the DSM for his actions on D Day.

Denis Hosgood said: “The book of my life is coming to the end but to be able to do this courtesy of Lucketts and Project 71 is the most wonderful final chapter. I can’t thank you all enough, this means so much to us all.”

Managing Director of Lucketts, Tony Lawman, a former Army Captain himself, said: “These brave men risked their lives for the freedom of our country. It’s our absolute pleasure to be able to help them revisit Arnhem and pay their respects on the 73rd anniversary of Operation Market Garden.”

Lorie Coffey, from Project 71, a voluntary organisation which organised the visit, said: “I can’t put into words how grateful we are to Lucketts for its support. This trip is so important to the veterans; it’s become a pilgrimage for them and we’re delighted it was made possible this year.”

The group was driven during its trip by Lucketts driver Peter Burgess, a volunteer with Project 71. Lucketts is a champion of servicemen and women and has signed the Ministry of Defence’s Armed Forces Covenant. In doing so it has pledged to offer guaranteed interviews to veterans, young and old, support employees who choose to be members of the Reserve forces and work with the Career Transition Partnership.

To find out more about Lucketts visit www.lucketts.co.uk