The 2016 season is off to a great start for the North Yorkshire Moors Railway (NYMR) when it welcomes the world’s most famous steam locomotive, 60103 Flying Scotsman, to its rails

The locomotive, which has just had a £4.2 million overhaul, will be at the NYMR between Saturday 12th March and Sunday 20th March 2016. The legendary engine is truly unique and was the first to travel non-stop between London and Edinburgh.

The NYMR is one of the most historic lines in the North of England, taking visitors on picturesque journeys along an 18 mile railway line aboard steam and heritage diesel trains. It first opened in 1836 as the Whitby and Pickering railway; unlocking Whitby’s trading potential by land. It was last in official action under British Railways, ceasing activity in 1965 before reopening as the North Yorkshire Moors Railway in 1973. 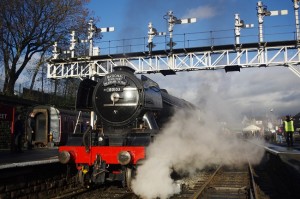 In May, the attraction will host a Spring Steam Gala held over two weekends (6th-8th and 13th-15th) with special visiting steam locomotives, including the last surviving London and North Western Railway Webb Coal Tank 1054. There will also be an Autumn Steam Gala, running from September 30th until October 2nd.

During summer the NYMR will host a Seventies and Diesel gala from 17-19 June, combining live music and diesel locomotives, and a Swinging Sixties Weekend on the 2nd and 3rd of July. This weekend will see a mix of period locomotives and vehicles, real ale and live music.

Other events at the North Yorkshire Moors Railway include Railway in Wartime from 14-16 October and the Santa Specials in December, where children can board the Santa Express to pay Santa a visit in his on-board grotto.

NYMR offers discounted rates for pre-booked groups of 20 or more. Benefits include reserved seating on the day and a free group organiser place. For further information or to pre-book tickets online before your visit please go to http://www.nymr.co.uk