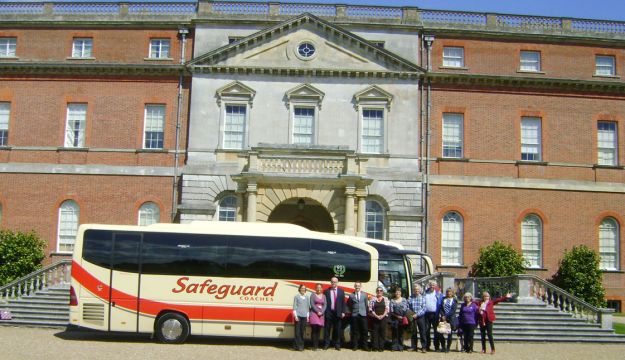 Guildford Borough Council’s Tourist Information Centre invited over 30 Coach Operators, Travel Agents and Group Travel Organisers to a whistle stop tour of the area, taking in key tourism attractions, with a view to attracting business into Guildford and the surrounding county

The opening night dinner was attended by The Mayor of Guildford, Cllr David Elms, and Anne Milton MP, who all welcomed the group to Guildford.  Guildford Fringe (taking place in July 2014) provided the entertainment for the evening.

During the trip the group stayed at the Legacy Hogs Back Hotel, and dined at the Legacy Thatchers.  They attended Guildford Cathedral, Dapdune Wharf, and Clandon Park, took an Historic Guildford Walk with the Guildford Town Guides and had afternoon tea in The Guildhall with a guided tour. They also went to Watts Gallery, Polesden Lacey, Brooklands Museum and the Yvonne Arnaud Theatre, and attended a workshop at the Hogs Back Hotel where they met representatives from other attractions that they were unable to fit into their bursting itinerary.

Since the event, several of the attendees have already made bookings to bring their groups to the area, providing a boost to the local tourism economy.

“It was interesting to hear all the different interests of the various groups represented, and the fact that with its wealth of art and culture, home and gardens and more, Guildford has it all.  The comments of the group after the trip will be fed into the Guildford Visitor Economy Strategy and help us with our future planning.  It was also refreshing to hear of the high profile Guildford has nationwide through its award-winning Tourist Information Centre, who are the first port of call for many visitors and groups to the area!

Modern, spacious, air conditioned coaches bring up to 50 visitors to the area in one vehicle instead of up to 25 individual cars – easing road congestion.  The average visitor on a day trip spends around £28 in the area, those on weekend breaks spend just over £160, and those on a longer break will spend £400 (source: Tourism South East).

A recent Cambridge Study revealed that in 2012, there were over 4.4 million day trips to Guildford contributing £311 million in visitor trip expenditure.

CTA- Responding to the COVID-19 crisis

Behind the scenes at Stratford Butterfly Farm!