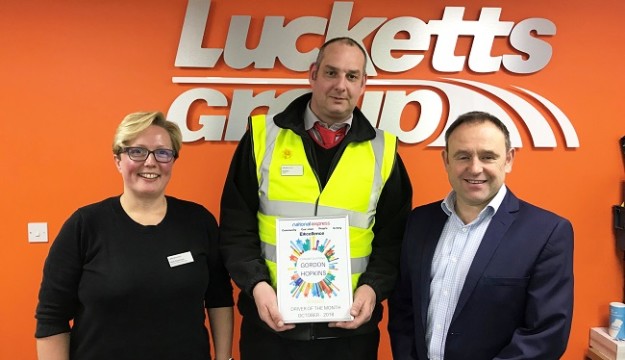 A coach driver from Lucketts Travel in Fareham has proved that hard work pays off by picking up a top award from National Express.

Gordon Hopkins was named as the National Express driver of the month, beating stiff competition from more than 2,000 others across the UK and putting himself in the running to become Driver of the Year.

Lucketts operates more than 100 journeys every day on behalf of National Express, some of which Gordon has been driving during the past 4 years that he has worked for Lucketts.

He was presented this week with the prestigious award by Lucketts managing director Tony Lawman and Vicki Robinson from National Express.

Tony said: “This is a well-deserved win for Gordon, who was chosen due to multiple nominations from his fellow colleagues, in particular the staff at Bristol Coach station who commended him for his hard work and positive attitude. We believe that he is a shining example of what a Lucketts employee should be and we wish him every success in his bid to become Driver of the Year.”

Gordon adds: “I’m thrilled to have won driver of the month and would like to thank my peers for their kind nominations. I’m proud to work for such a renowned company and this award is just the icing on the cake.”

Tony adds: “Lucketts has worked alongside National Express for a number of years and we look forward to continuing our relationship with this highly reputable company in the future. We strive to train our drivers to be the very best in the business and hope that Gordon’s win will be a great inspiration for those wishing to excel on their own career path.”

Have you registered yet for our latest FAM trip ?