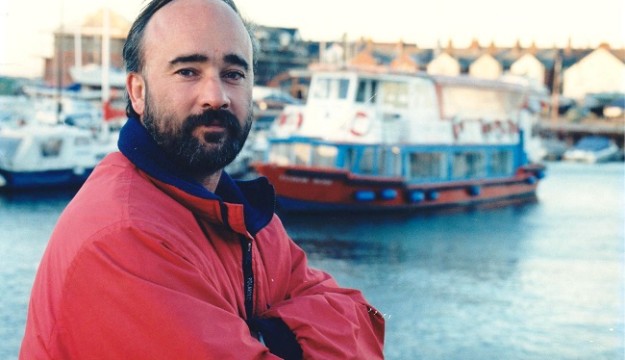 Ian Stuart was born in Exmouth on 1st August 1964. Ian’s mother frequently remarks that he was an ‘absolute nightmare’ to raise – impossible to keep track of, hated school and very much did his own thing from a very early age

With this in mind, Ian’s achievements, through relentless hard work and sheer determination seem all the more extraordinary and it is no wonder that he earned nothing but respect from the many people he knew, from all walks of his colourful and full but terribly short life.

Stuart Line Cruises was founded in 1968 by Ian’s father, Tony Stuart. He operated a small wooden 52-seater boat called ‘Seacrest’ from Exmouth seafront and became well-known locally for his cries of “half-hour trip around the bay, you pay on the boat”!

Having spent his childhood pottering about on boats, Ian Stuart gained his Skipper’s ticket on his 18th birthday, enabling him to work alongside his dad, running fishing trips out to sea whilst Tony continued to run the shorter sightseeing trips.Ian met Philippa when he was 20 years old and Ian’s mother maintains to this day that she was the best thing that ever happened to him

Ian’s ‘other half’, Philippa, purchased the open-top ‘Mini’ at a cost of £2500 in 1985. The couple ran ‘Mini’ together, with Ian at the helm and Philippa in charge of ticket sales. Seating 75 passengers, ‘Mini’ was popular throughout the summer, though didn’t provide a great deal of comfort during less favourable weather conditions!

Ian took over his father’s business in 1992 and in 1994, Ian and Philippa purchased ‘Tudor Rose’. This was the real turning point for their ever-growing seasonal business and an exciting time of change. ‘Tudor Rose’ boasted a covered and heated saloon, enabling them to start working throughout the year. The first wedding was held on Tudor Rose in 1995 and it was not long before they started their famously spectacular Sail with Santa and Guided Bird Watching Cruises during winter – both of which still run today and are extremely popular!

Ian was charismatic, good-humoured and incredibly generous by nature – character traits which carried him throughout the impressive progression of his career. He was a straight-to-the-point, get up and go-getter, no-nonsense sort of man who worked incredibly hard for everything that he had. The brand new ‘Pride of Exmouth’ arrived in 2003, at a cost of £350,000. She was without doubt the most state-of-the-art passenger boat of her time, licensed to carry up to 250 passengers and built to European Class C Standards, licensed to operate anywhere in the country – yet another enormous turning point for the now very successful Stuart Line Cruises.

Ian was a shrewd businessman with a sharp eye for new opportunities. His passion for Exmouth and the growth of its economy became increasingly apparent as his career progressed and he was wholeheartedly unafraid to go against the grain. He was an active member of the Exmouth Chamber of Commerce, donated generously to numerous local charities and gave a vital voice to many environmental matters.

As the business evolved, Ian started to recognise the group travel market within the tourism industry and its potential impact on his year-round business, voicing its importance across Devon. Ian truly believed that we are stronger together and worked tirelessly within the industry on a national and international level, investing in opportunities to speak to operators directly and remain at the forefront of the industry. He passionately believed Devon to be the best destination in the UK and was awarded many accolades over the years, filling him with immense pride.

In 2010, Ian was diagnosed with throat cancer. He underwent gruelling treatment and having earnt his Skipper’s ticket at the age of 18, his son, Jake stepped in. Jake had been involved in the business part-time throughout the majority of his life by this point and business continued as usual.

In time, Ian made a full recovery and playfully toyed with the idea of retirement but the business was his life and he couldn’t stay away for long. Ian went on to live a further 9 full years, during which he worked in partnership alongside Jake, who shared Ian’s passion for the water. The transition from one generation to another has been gradual and Ian was able to pass on his depth of knowledge to Jake, who gained an integral understanding of boat handling and of how to run the business successfully.

Ian’s family were devastated when he was once again diagnosed with cancer in 2019 and due to the treatment he had received in 2010, his options were extremely limited – Ian’s illness was terminal.

Ian filled the last year of his life with a mixture of work, leisure and quality time with his loving family, whilst receiving palliative treatment and fought his illness with great stoicism. His optimism was unrelenting and he bore his final illness with courage and dignity, which is testament to the quality of this remarkable man.

Ian passed away at the age of 56, following a wonderful week away with his wife, Philippa, during which he sat comfortably with an uninterrupted view of the sea and was thrilled to see ‘Pride of Exmouth’ sail past with Jake at the helm, during his Jurassic Coast Cruise. He defied the odds in surviving as long as he did, in true spirit of his character and he leaves behind a great legacy which will live on in Stuart Line Cruises for years to come. Sail on dear Ian. Fair winds and following seas.

ALL ABOARD AS NYMR RELEASE JULY SERVICE TICKETS