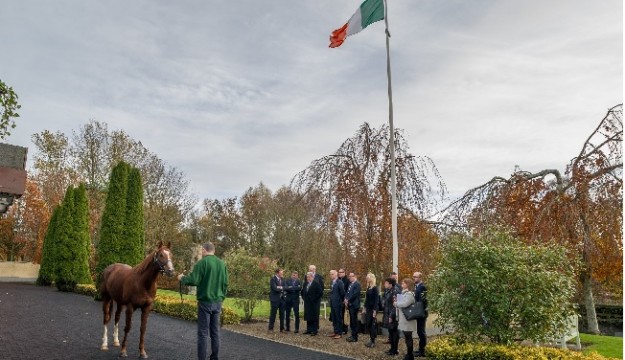 “Ireland and New Zealand are already close friends but our new diplomatic post will strengthen connections and further develop the relationship. As small island nations committed to democracy, the rule of law and free and open trade, we look forward to working well together,” said Mr Peters.

Mr Peters also visited the Irish National Stud and The Curragh Racecourse to discuss the important role the racing industry plays in both countries. He was joined on the visit by New Zealand’s first resident Ambassador to Ireland Mr Brad Burgess.

The Irish National Stud’s Thoroughbred Breeding Course welcomes students from all over the world including 36 students from New Zealand since its inception in 1971.Since 2006 each year the K.I.A. Taylor Charitable Trust, associated with the Taylor family, owners of Trelawney Stud, Cambridge, has generously funded a Scholarship for a person to attend the Irish National Stud Thoroughbred Breeding Course. Since 2015 the scholarship is now known as the Keith and Faith Taylor Equine Scholarship and provides the tuition fees and airfare for the successful candidate to attend the five-month course at the Irish National Stud.

Irish National Stud CEO, Cathal Beale said, “it was a great honour for all the team at the INS to be chosen specifically by the Deputy Prime Minister and newly appointed Ambassador for a visit. Our proud linkages with New Zealand trace back many years and we were very happy to extend to them our hospitality and to discuss the many facets of our great racing industry.”