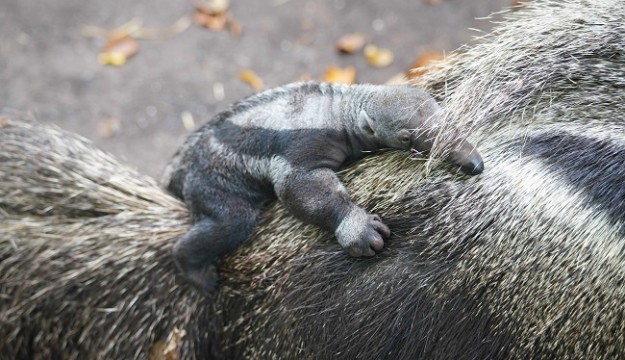 ‘A’ is for aardvark, anteater and armadillo – Keepers at Longleat are celebrating the births of their very own animal ‘A’ team.

Among the new arrivals is a baby aardvark, the first to have been born at the Wiltshire safari park. Weighing a little more than a kilogramme at birth, the bizarre-looking calf is born without hair, has drooping ears and wrinkled skin.

Over time it develops hair, the long ears become upright and the wrinkles slowly disappear.

“This is our first ever aardvark birth so we are paying particularly close attention to how the calf is growing and checking its weight daily,” said Team Manager Catriona Carr. “Aardvark calves can be fragile in their first stages of life, and parents can sometimes be a bit clumsy so we are closely monitoring mother and baby and helping with feeding sessions until the calf has got stronger and can look after itself,” she added. 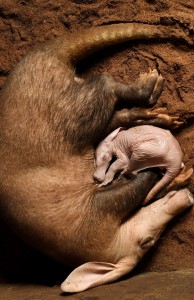 Originally from Sub-Saharan Africa, aardvarks are renowned for their tunnelling abilities and are capable of digging through a metre of soil in under 30 seconds. The two-metre-long mammals have specially-adapted spade-like claws on their front legs which allow them to dig out up to 50,000 bugs in a single evening.

They also have tongues measuring in excess of 30cms and nostrils, which they can completely close to prevent dirt getting into their noses. The other members of the ‘A’ Team are a baby giant anteater and a pair of six-banded armadillos.

Giant anteaters originate from Central and South America and can be found in tropical and deciduous forests. As its name suggests the giant anteater is the largest of the anteater family and can grow to over two metres in length with tongues that extend to more than 60cm.

The new arrival is the latest success story for Longleat captive breeding programme for the species, which is officially listed as ‘Vulnerable’ on the International Union for Conservation of Nature (IUCN) Red List of Threatened Species.

As for armadillos, the name comes from the Spanish for ‘little armoured one’ and refers to the hard, protective bands which cover their bodies and protects them from predators. This protective layer is actually made from keratin, the same material which is in our hair and nails.