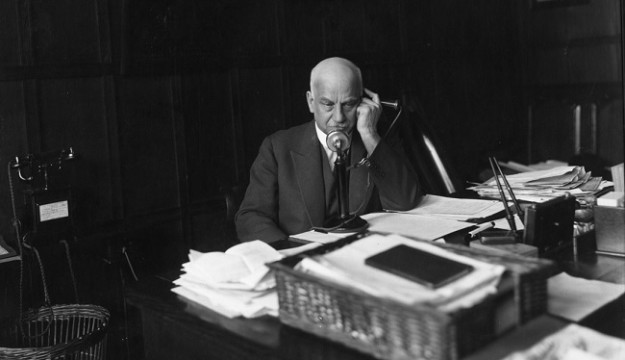 The British Motor Museum and MG Motor UK have entered into an agreement which will ensure the long-term future of Lord Austin’s Office.

Known by the workforce as ‘The Old Man’s Office’ it was the place where many of Austin’s important decisions were made. The Office had been preserved after Austin’s death, although not in its original position on the Longbridge site. In this revised location the Office has not been accessible to the public due to operational requirements at the plant and the long term viability of the location could not be guaranteed.

This new agreement will see the Office re-established at the British Motor Museum, displayed to the many thousands of people who make a visit to Gaydon each year. Over the past months the Museum’s curatorial team have been carefully cataloguing and recording the objects, fixtures and fittings from the Office, before overseeing their painstaking removal and packaging, in preparation for the journey to the Museum.

Stephen Laing, Head of Collections at the British Motor Museum said “We’re honoured to be the new home for Lord Austin’s Office. It joins many other significant artefacts from Longbridge’s history in the Museum and Archive, including the one-millionth car to be produced by Austin in 1946 and some of Herbert Austin’s personal possessions and papers. It will also join the office of William Morris, Austin’s great rival, which has been preserved at the Museum for many years.”

David Pugh, Marketing Director at MG Motor UK commented “MG is very aware of the importance of its custodial role for the proud heritage of the Longbridge site. In the British Motor Museum we have found a partner who will make Lord Austin’s Office accessible to many more people and that has the expert staff to care for its future.”

The Museum has already begun the next phase of planning the exhibition space for the Office and is embarking on a fundraising programme both for its rebuilding and to bring fresh interpretation about the Office and Herbert Austin, with the aim of opening the display to the public later on in the year.

To find out more information about the British Motor Museum please visit the website at www.britishmotormuseum.co.uk

THE FIRST NATIONAL COACH WEEK CAMPAIGN SUPPORTS THE REVIVAL OF THE...