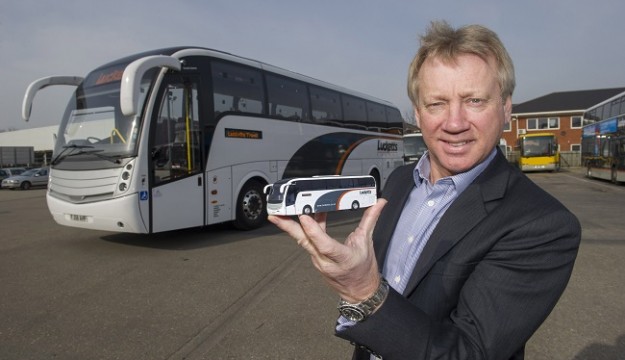 Premier coach firm Lucketts Travel group has made another significant investment — this time by adding 480 new vehicles to its fleet.

But these coaches will never serve on any of Lucketts’ routes and are slightly smaller than the firm’s existing vehicles, as they have been made by world-famous model manufacturer Corgi.

It has used Lucketts’ fully liveried Scania K34 EB Caetano Levante as the model for two limited edition miniature coaches. One has the Isle of Wight Festival as its destination, while the other coach shows Private Hire on its destination board. The festival version is on general sale from Corgi, while the Private Hire version is only available from Lucketts directly.

“This is definitely the largest number of vehicles we’ve added to our fleet in one go,” said Steve Luckett, the coach firm’s joint managing director. “Our company has grown from a family firm into a large regional business, and our coaches are well-known on roads up and down the UK.

“As a result of our expansion, and to recognise our success, we thought the time was right to approach Corgi to discuss the possibility of producing these models. Corgi agreed they would be a good addition to their collection.”

The vehicle the model has been based on has the plate FJ58AHP, which is a real coach operating within the Lucketts fleet of around 100 vehicles. It was originally bought by the company in 2009 to service the firm’s National Express contract, and has since been refurbished, re-liveried and is now operating as a private hire coach from Lucketts’ headquarters in Fareham, Hampshire.

The model coach is in esteemed company, joining the Batmobile, James Bond’s Aston Martin DB5, and Chitty Chitty Bang Bang in Corgi’s catalogue, as well as another recognised brand on the roads today – Eddie Stobart haulage lorries. Steve added: “We are very proud to know Lucketts’ vehicles are taking their place alongside some of the most recognised cars and lorries in the UK and around the world, and I’m looking forward to watching them roll out of our yard in the hands of our customers and collectors.”

For more information on The Lucketts Travel Group visit www.lucketts.co.uk