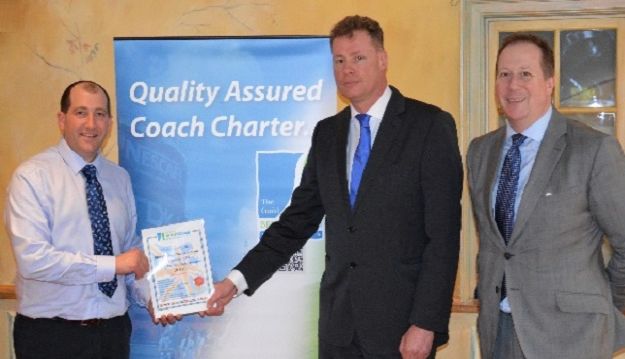 Paul Marshall (left) is presented with his membership certificate by Guild Chairman Andrew Richmond (centre) in the presence of Senior Traffic Commissioner Richard Turfitt, who addressed members at the Guild’s AGM

Marshalls of Sutton on Trent have become the latest quality operator to join the prestigious Guild of British Coach Operators.

Guild Chairman Andrew Richmond said:  “We are delighted to welcome another successful and respected operator into the Guild, with a further member to be announced shortly.  I’m sure Marshalls will have a lot to contribute to our discussions as we continue to share best practice and showcase excellence in coach travel”.

Paul Marshall, engineering director of Marshalls of Sutton on Trent, said: “We want to be recognised as one of the top coach operators in the country and we like the way that the Guild works and the information they collate and distribute to the members.  We are looking forward to working with the other operators and sharing our experience within the industry”.

Marshalls are already benefitting from the Guild’s annual benchmarking survey, which was presented to members at the AGM in April.

Marshalls was founded by John Marshall in 1989 and has developed gradually over the years from a one vehicle operation to its present size of 37 vehicles, made up of 11 coaches and 26 service buses. In 2014 an additional Transport Manager was recruited to take charge of the Coaching Unit, this has proved most successful in raising the profile of the coaching element of the business.  All vehicles in the fleet carry the very distinctive Blue and Cream livery which is recognised nationwide.

Now in its 33rd year, the Guild promotes and markets the services of its members, all of whom commit to meeting the highest quality standards, assured by regular independent audits.  Prospective members have to achieve a 100% pass before being accepted into the Guild.   The Guild is also registered as a Driver CPC training centre, giving members access to a suite of courses specifically designed for the coach industry.