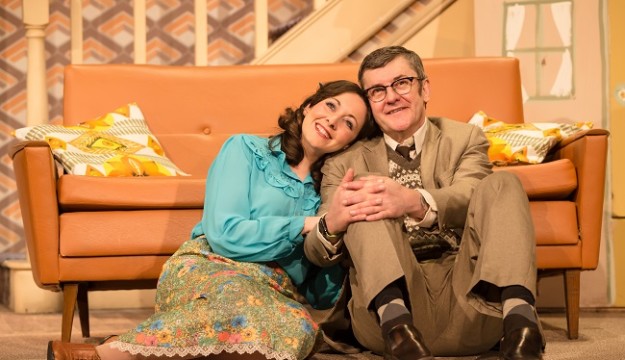 Hilarious mishaps and DIY disasters are ready to bring down the house when Some Mothers Do ‘Ave ‘Em arrives at Aylesbury Waterside Theatre Tue 21 – Sat 25 Jun. Taking to the stage will be Susie Blake returning as Frank’s disapproving mother-in-law Mrs Fisher, Moray Treadwell as Mr Luscombe/Mr Worthington, James Paterson as Father O’Hara and Ben Watson as Desmond/Constable. They join the previously announced Joe Pasquale as the loveable but accident-prone Frank Spencer and Sarah Earnshaw as his long-suffering wife Betty. Also in the cast are Nick Wray and Alice Osmanski.

Based on the 1970s classic TV comedy by Ray Allen and directed by the award-winning Guy Unsworth, Some Mothers Do ‘Ave ‘Em is the ultimate feel-good night out, washed down with lashings of nostalgia and Mother’s prune wine. Betty has exciting news for Frank, but he’s preoccupied by possible newfound fame as a magician. With guests arriving for dinner and crossed wires all round, priceless misunderstandings are on the menu.

Susie Blake regularly appeared in the TV series and comedy specials of Victoria Wood, Russ Abbot and Stanley Baxter, and is perhaps particularly loved as the Continuity Announcer in Victoria Wood: As Seen on TV.  She recently has appeared inSilky Hotel (BBC iPlayer), Kate & Koji (Series 1&2 – ITV), Not Going Out (BBC One), The Real Marigold Hotel (BBC One). She is known for playing regular Bev Unwin in Coronation Street from 2003 to 2006 and again in 2015, and regular Hillary Nicholson in Mrs Brown’s Boys.  Her films include Fierce Creatures and Nativity 3: Dude, Where’s My Donkey?!. Her theatre credits include Fisherman’s Friends: The Musical (Dominion Theatre & Hall for Cornwall), My Fair Lady (Grange Festival), The Mirror Crack’d (UK Tour), Grumpy Old Women Live 2 & 3, When We Are Married (West End), Pygmalion (Chichester Festival Theatre), Madame Morrible in Wicked (West End) and Belinda Blair in Noises Off (National Theatre).

James Paterson made his London debut in the original production of The Phantom of the Opera. During his long association with the show he played the title role when Michael Crawford was indisposed and also played M. Andre. He became Resident Director for the national tours and the London production. His other theatre credits include Sunset Boulevard (London Coliseum), Half a Sixpence (Chichester Festival Theatre), Cats (UK/International Tour), Cinderella, Dick Whittington and Snow White (The London Palladium). James most recently played Herr Schulz in Cabaret for ARTS Aberdeen. His television credits include London’s Burning, Close To Home and Birds of a Feather.

Ben Watson is an actor, writer, director and comedian who recently starred in Around the World in 80 Days (Blackpool Grand Theatre). He regularly performs his own solo comedy show The History of Everything in 60 minutes. His theatre credits include Aladdin (White Rock Theatre, Hastings), I Capture The Castle (Watford Palace / Bolton Octagon / Oxford Playhouse), Blue Brothers Party (UK / Japan Tour), The Jungle Book (UK Tour), A Midsummer Night’s Dream and Comedy of Errors (Cambridge Shakespeare Festival).

Get ready for giggles galore, tickets are on sale now!