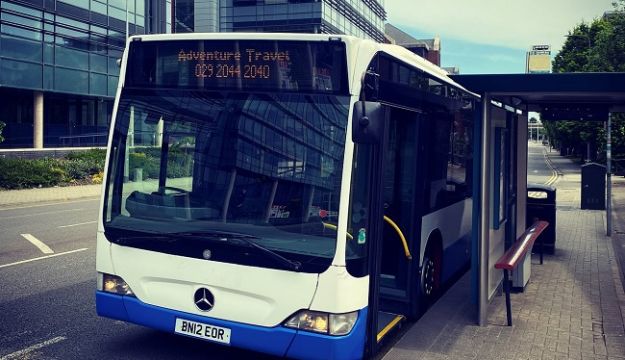 A leading Welsh transport provider and Local Authorities in South Wales have unveiled plans to recover a key bus route that will operate between Chepstow and Bristol.

NAT Group, in partnership with TrawsCymru and Monmouthshire Council, have unveiled plans to continue the ‘Severn Express’ bus route, which is an existing bus route that operates between Chepstow and Bristol via Cribbs Causeway and Clifton.

The route, which was originally operated by First Group and then Stagecoach, was unfortunately terminated. However, after many voiced their concerns to the local authorities, NAT Group, TrawsCymru and Monmouthshire Council, were able to take over the operation, renaming the route ‘TrawsHafren’ (across the Severn) and keep the service in place for the many workers and students who use the service to commute.

NAT Group will begin operation of TrawsHafren on June 15th 2020, taking over where Stagecoach left off and ensuring there are no gaps in service. The route will operate via Cribbs Causeway and will enter Bristol via Clifton, which is believed to be the best possible route to avoid adverse congestion, and therefore reducing travel time.

The route will initially operate on a six-month pilot scheme, allowing NAT Group to observe and see if there are any improvements needed, such as a revised timetable that will better suit the needs of commuters and students.

Amongst the changes for the new service will be a new dedicated app that will be launched in time for the revised service, which will enable pre-booking, live vehicle tracking and advance cashless payment. It is believed that this new, easier boarding process, along with the timetable improvements, will help to generate additional patronage and a more desirable service. The route will also benefit from regular drivers who will be specially selected for the route.

Commenting on the new bus route, NAT Group Managing Director Adam Keen, said: “NAT Group are delighted to be able to provide a continuation of the established Severn bus route, providing connections and travel options for cross-border passengers. This is a great example of operator, local authority and Welsh Government working together for the good of the travelling public. I am sure that with the new technology, the dedicated drivers and the revised timetable, this route now has the very best possible chance of success”

Cabinet Member for Infrastructure and Neighborhood Services, Cllr Jane Pratt said: “Preserving vital services has and will always be a top priority for Monmouthshire County Council, especially during this difficult time. Keeping our towns and cities connected will be extremely important going forward, as we work to get our economy back up and running.

“I’m pleased we have been able to work with the Welsh Government and N.A.T. Group to find a solution to saving this route. The pandemic has given us all a time to reflect on our impact on the environment. Going forward, I would encourage everyone to think about how they can help reduce their impact on climate change and public transport is vital in reducing our reliance on the car and I would encourage much greater use of public transport in the future to support the climate change emergency.”

NAT Group operates bus services in South Wales, with depots in Cardiff, Swansea and Taffs Well and owns 150 vehicles. In May, the company announced it would no longer operate international travel, and instead focus its efforts on running high quality bus services and private hire throughout the UK.