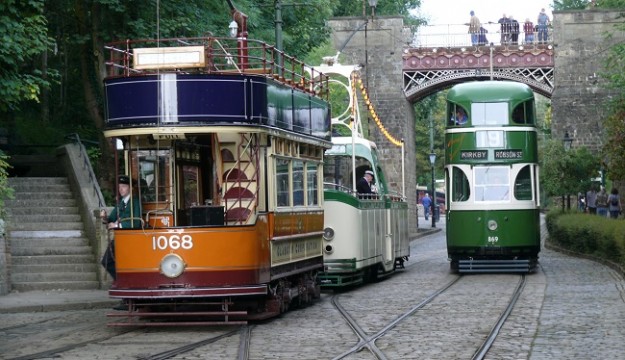 Crich Tramway Village, home of the National Tramway Museum, is due to open on 19th March for the 2016 season.

The outdoor play area is situated near to the Woodland Walk and Sculpture Trail and will provide more facilities for older children visiting Crich Tramway Village.

The Worshipful the Mayor and Mayoress of the Borough of Amber Valley, Councillor Trevor Ainsworth and Mrs Jennifer Ainsworth, will open the new play area at 11.00am on Monday 21st March 2016.

There are events planned throughout the season, the first of which is the 1940s /World War II Home Front event running from Saturday 26th to Monday 28th March.  The event offers the chance to experience a real taste of life during the Second World War in Britain, plus an Easter Egg Hunt for the children.

One of the event organisers, Doug Kightley said: “As well as vintage trams from the period, visitors can expect to see military vehicles, re-enactors, evacuee scenarios and a children’s ‘Boot Camp’, run by Sergeant Major Stuart Adams, who recently appeared in the new Dad’s Army film.

Traditional pub games will be on offer in the Red Lion Pub as well as local beers, while Rita’s Tearooms will offer War-time fayre.

Entertainment includes war time songs from entertainers during the day and an evening dance on Sunday 27th March”.