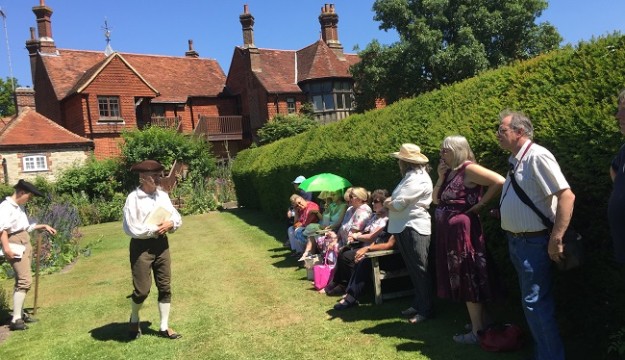 The sky’s the limit thanks to this virtual offering

Get star struck in Hampshire with a little help from Winchester Science Centre, an interactive science and technology centre with the UK’s largest standalone planetarium. Located on the edge of the South Downs National Park, a Dark Sky Reserve, it currently produces an online monthly stargazing guide, offering tips on what to spot in the night sky. https://bit.ly/2xWVCNd

2021 will mark 25th birthday of Lara Croft
One of the stars of an augmented reality self-guided trail around Derby, Lara Croft may be fictional, but the intelligent and athletic archaeologist – beloved by millions in games and films – was “born” at Core Design in Derby. Lara first appeared in the video game Tomb Raider in 1996 and after a couple more games, Crystal Dynamics took over the series in 2003. She holds six Guinness World Records, and was the first video game to make the transition to film. https://bit.ly/3dZ8aDp

Enjoy Freedom, at home
Hull’s annual flagship cultural event, the Freedom Festival – which features street theatre, music and dance - is going online for 2020. As a result, this year’s Festival will present an exciting broadcast and online programme, including live music, spoken word, talks and artistic work, with participatory elements via the BBC and digitally at home from September 4 to 6. https://bit.ly/2AzMEX9

Visit a Virtual Vegan Market in Derby
Derby’s first ever Virtual Vegan Market will take place on June 28. Set to be packed with stalls – selling everything from mouth-watering food, lifestyle brands, and luxury cosmetics, through to ethical clothing, eco-living products and more – it will feature Derby businesses as well as some top producers from further afield. Browse and buy from 10:30am to 4pm at https://bit.ly/36f4Il2.

#BeMoreGilbert
Gilbert White’s House & Museum has introduced a new online campaign – #BeMoreGilbert – designed to help people at home connect with the natural world around them. The world’s first ecologist, Gilbert White is a lockdown inspiration, taking his pioneering observations from his garden and local walks, and this helps people around the world share their nature discoveries from their garden, local daily walk or even their gardening triumphs. www.gilbertwhiteshouse.org.uk/

Let this entertain you
Stoke Reads have brought a very special guest to their latest Story Quest. In Just the Ticket, the characters are frantically searching Burslem Park after losing their tickets to Stoke-born Robbie Williams’ planned “homecoming gig” at Port Vale stadium. They meet a dark-haired stranger in a Port Vale cap who seems very familiar… Although the gig itself is postponed, families who live within walking distance of Burslem Park (and three other parks in Stoke-on-Trent) are invited to meet fictional Robbie as part of their daily exercise. https://bit.ly/3fXJVXL

Contents of historic Nightingale scrapbook revealed online
A scrapbook illustrating how Florence Nightingale became a cultural phenomenon has gone on show, online, in the 200th anniversary year of the birth of the pioneer of modern nursing. In her time, she was also famous as an icon of popular culture, as shown by the scrapbook, part of the collection at Derby’s Local Studies and Family History Library. www.derby.gov.uk/derbyshistory