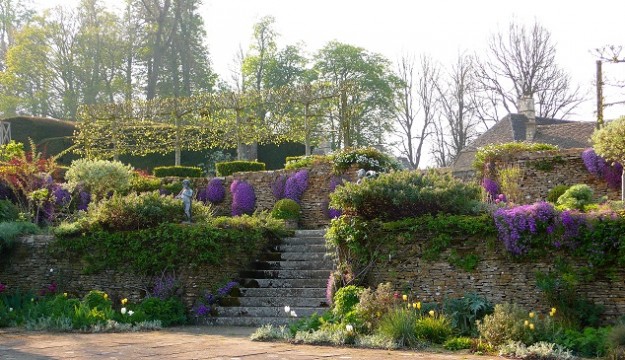 This lovely, timeless garden, with spectacular views over both deer park and rolling Cotswold hills beyond, was created in 17th Century and still retains a wonderful sense of peace and gentleness.

The handsome Cotswold stone Manor dates from 1620 and a Johannes Kip (1653-1722) view shows the terraced walled garden exactly as it is today.  Sir Edwin Lutyens was commissioned to build a five arched loggia and the terraces are a perfect balance of architecture and planting, with a fine specimen of Magnolia soulangeana and wisterias.

Beneath the terrace splendid grass steps, fringed with campanula, lead to the South lawn and an ancient mulberry tree Morus nigra, believed to be planted in 1620.

There are extensive yew hedges, including a notable yew walk with topiary designed by Lutyens, which were planted around 1925 and are clipped annually at the end of August.  West of the house, a rill with fountain and an octagonal stone summerhouse are recent garden additions to commemorate the Millennium, ending with a line of pleached limes.   Beyond the rill a large walled garden boasts extensive double borders, which are 92 metres long and 5 metres wide and are amongst the largest in the country privately owned.  These borders have undergone a total re-plant over the last two years and now contain a wide range of roses, clematis, shrubs and herbaceous, all arranged in individual colour sections divided by rose pergolas and planted to provide flower and interest from spring to autumn. An ancient Sycamore which as a young sapling grew into the wall above, foxgloves and cyclamen have colonised it over the years majestically stands at the bottom.

Around the top corner of the walled garden stands a copper beech which sets the scene for the impressive view down towards the house and overlooking the Arboretum. The gardens comprises 3.5 ha and is managed by Nicholas Wills and open to the public 6 days a week and is tended by two full time gardeners and part time help l day a week.

A stunning garden to visit from spring until autumn.

Spring: Drifts of snowdrops and aconites, fabulous flowering magnolias, trees and shrubs, Banks of Bluebells scenting the warm early summer mornings on walks throughout The Park.

One of the most enjoyable features of Misarden is the way the gardens merge in the surroundings and the garden’s ability to harmonise with the environment.

To plan your visit and for further information:-