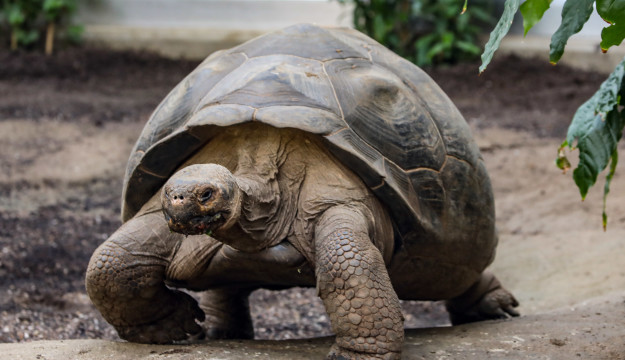 Giants of the Galápagos set to open Saturday 9 October .

Giant Galápagos tortoises Dolly, Polly and Priscilla embarked on an epic trek across ZSL London Zoo to move into their new home today, ahead of the opening of the Zoo’s new Giants of the Galápagos exhibit on Saturday 9 October.

Each guided by a dedicated keeper - proudly sporting their tortoise’s name on specially designed ZSL t-shirts - the feisty 26-year-olds took the 200metre stroll in their stride, passing the Zoo’s red river hogs along the way without a second glance, and stopping for nibbles on the Zoo’s lawns before arriving at their state-of-the-art new home in just over an hour.

Dolly initially took the lead, accompanied by zookeeper Joe Capon, but after a promising start - and a few breaks along the way - she was overtaken by both Priscilla and Polly, eventually reaching Giants of the Galápagos in a nonetheless very respectable time of 1hr 21mins.

In the end, Polly was the first to enter the trio’s new Giants of the Galápagos home in a time of 1hr 09mins, followed by Priscilla coming a close second taking 1hr 11mins. Zookeepers have spent months preparing the sisters for the big move, mapping out the shortest route across the 36-acre zoo and training with the mammoth trio – using brightly coloured cones as markers for them to follow.

Encouraging snacks were supplied by keepers manning a roving water(melon) station, so that the tortoises could refuel throughout the journey. Dr Chris Michaels, head of the herpetology team at ZSL London Zoo, said: “As it is a relatively short distance between their old and new homes, we decided to forego moving vans and gave Dolly, Polly and Priscilla the option to walk there – albeit with specially designed travel crates on hand as back up if anyone changed their mind. 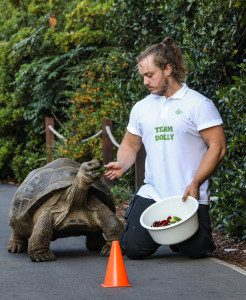 “We made sure to have plenty of tasty cucumber, carrots and watermelon handy as extra encouragement if needed, but after clearing an access from their old outdoor paddock onto a Zoo path, it was full steam ahead for the three females – who undertook the walk at their own pace, each accompanied by a zookeeper for support.”

The trio of feisty females will spend the next few weeks settling into their swanky new island pad - which has a choice of two lagoon pools to cool off in, a muddy wallow for self-care spa treatments and a tropical forest to explore – before Giants of the Galápagos officially opens to the public next month. From Saturday 9 October, people visiting the slow-moving siblings in their new Giants of the Galápagos home will be transported to the famous archipelago, surrounded by the sights and sensations of the pristine, isolated island chain.

Chris added: “We’re looking forward to welcoming visitors to our new Giants of the Galápagos exhibit in October, when it officially opens to the public – there’s so much to learn about the wildlife on these incredible islands.”

A great value day out this autumn, Giants of the Galápagos will be free with Zoo entry: book your trip now at www.zsl.org