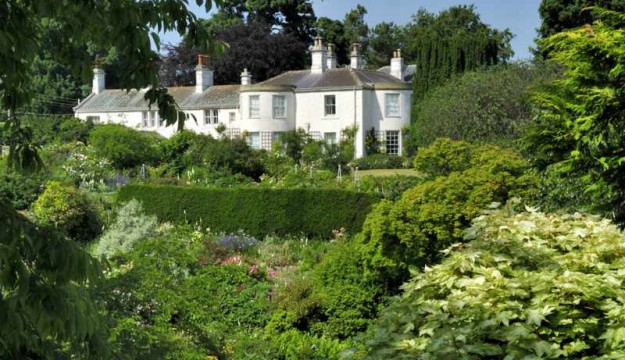 We are lucky at Mindrum, to have a wonderful limestone pavement rock garden which was installed in the Mid 1930’s.

Part of the Tankerville estates for over 800 years,  Mindrum was sold in 1919.  In 1927, the farm was bought by Charles Chartres, a hydro electric engineer from India.  His wife, a keen gardener started to develop the garden and in the 1930’s, it is on record that she fell in love with a rock garden in the Chelsea Flower show.  She brought it to  Mindrum on the train, installing it in the grassy gully on the southern edge of the garden.

Little is known about the garden at this stage, but in the late 1940s, the now extensive gardens became rather hard work and, allegedly, Charles (having sent his wife to London to go shopping with a cheque for £200) covered the rock garden with soil and on her return she found that it had been planted with Scots Pines.  (Some of which are still visible today).  History doesn’t relate the discussion that ensued on her return!

When he moved to Mindrum in 1955, One of the first things that Pery Fairfax did on hearing that there was a lost rock garden, was to find and recover it. Over a two year period, he and his team carefully removed trees and excavated the hillside until he discovered the pools, cliffs, rocks and waterfalls that had been lost over a decade earlier.

After marrying Pery in 1965, Ginny became interested in the garden and over the next 5 decades, Pery and Ginny developed the gardens, with Pery focusing on trees, ponds and the structure and Ginny using her artists eye to develop a series of astonishing herbaceous borders. Tom and Miki have now taken over the baton, and eighty years after its initial layout, the rock garden is still going strong, changing every year and still in good working order.  Every so often, we keep finding new bits! For more information contact:-