Role of the bus to be commemorated at Euro Bus Expo 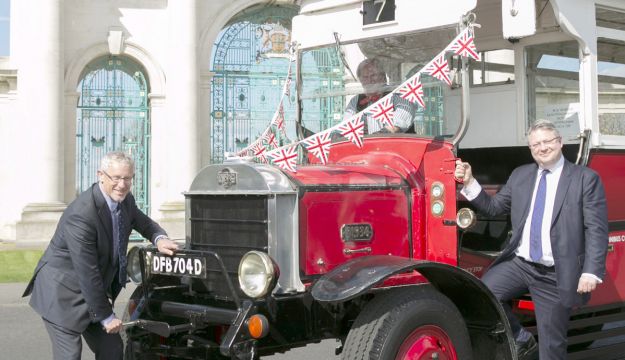 Marking 100 years since the start of the First World War, organisers of Europe’s premier trade fair of 2014, Euro Bus Expo, will commemorate the role played by buses and their drivers during the conflict, at the event this autumn

To launch this year’s visitor campaign, Mark Griffin, Show Director along with CPT’s Simon Posner (CEO) and Ian Morgan (Chairman), travelled to Nottingham to see first-hand the type of vehicle used extensively throughout the war, most often as transportation for troops to the front line, ambulances and sometimes even mobile pigeon coops.

A statement from the Secretary of State for Transport, Patrick McLoughlin, said on the Confederation of Passenger Transport (CPT)’s launch of the bus and coach industry’s First World War commemorations: “In 2012, the Prime Minister spoke of how the Government would commemorate the centenary of the First World War. He said:

“Our duty towards these commemorations is clear: to honour those who served, to remember those who died, and to ensure that the lessons learnt live with us forever…”

I certainly echo those sentiments, which is why I am pleased that the Confederation of Passenger Transport is leading the bus and coach industry in commemorating the First World War. Transport played a key role throughout the war effort, and it is right that we remember the men and women who made that possible.

I understand that Euro Bus Expo, being held in the autumn, will further recognise the contribution to the war effort made by bus operators, and particularly the increasing role of women in the industry. I hope that this occasion will be a fitting tribute to those who served, and to those who gave their lives.”

Chief Executive of CPT, Simon Posner said: “There will be numerous events this year commemorating the start of WW1. It is absolutely right that the industry recognises the vital role played by the bus and those staff a century ago. We shall be including a commemorative display within the show this year which coincides with the run up to Remembrance Day. It will give an opportunity to see how technology and innovation has progressed in all those years and pay tribute to those who supported the war effort.”

Mark Griffin comments: “Over a 1000 B-Types, with their drivers, were requisitioned by the war department in 1914 for use on the Western Front. Many did not return. As an industry it is important that we mark such a key part played by these unsung heroes. And it’s equally important that we look forward– which is exactly what we’ll be doing at the show this year. With new products being launched at the show that we know of already it will be another great showcase to attend for anyone with an eye on the future.”

Euro Bus Expo, 4 – 6 November, will focus firmly on the future of passenger transport with an education programme based on technology and the environment.

Visitors to the show will be able to see the 1910 London General Omnibus Company B-Type or ‘Ole Bill’ pictured. It is one of only two restored examples currently in working order in the UK today and is owned and operated by Malcolm Hearson of Hearson Heritage Tours of Nottingham.