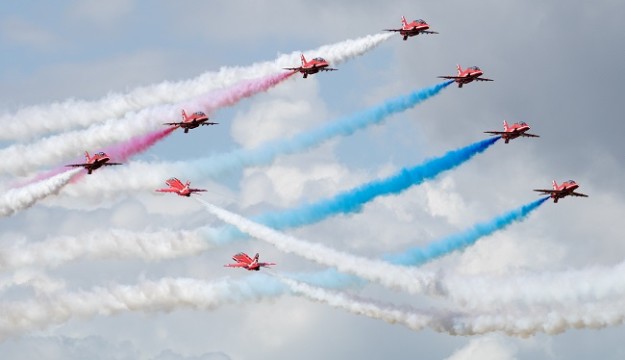 The show will include over five hours of dazzling flying displays featuring fast jets, historic warbirds, helicopters, formation aerobatic display teams and role demonstrations enhanced by spectacular pyrotechnics and flares. Some of the world’s most capable pilots and their aircraft, both in the air and on the ground will be on display, providing an opportunity to see some magnificent equipment and meet personnel from the UK Armed Forces and Foreign Military allies in a family-friendly environment.

There are some rare and exciting aircraft confirmed for the Air Day. The iconic Harrier ‘jump jet’ will once again grace the sky over RNAS Yeovilton giving young aviation fans the chance to see the legendary aircraft’s capabilities of hovering, turning on the spot, flying backwards and sideways for the very first time. The state-of-the-art multirole F-35B Lightning stealth fighter will bring a glimpse of future UK airpower to Air Day with two flypasts. The Red Arrows will perform one of their last UK displays of the year before they depart on their tour of North America and you can also witness a human flight demonstration by the gravity-defying ‘Jet Man’. Unique to Air Day is the dramatic pyrotechnic-filled Commando Assault demonstration by Royal Marine troops and the Commando Helicopter Force – an unmissable finale to the thrilling line-up. 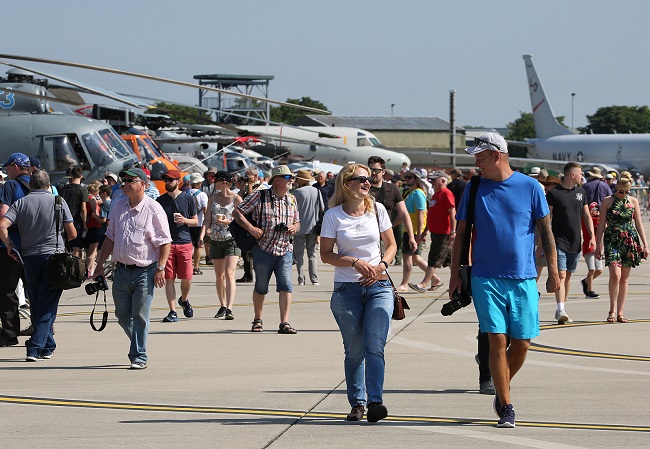 Visit the land of the ‘heavies’ where a number of very impressive, large military transport aircraft will be on static display from different nations, including the USA, Qatar, Germany and Italy. Most of them will be open for tours so you will get to see how big they really are! Performing a flypast in their UK airshow debut will also be a very rare heavyweight addition – the Royal Canadian Air Force’s CC-130J-30 Hercules!

In the STEM Zone, children can take part in many free interactive activities providing opportunities to learn about the fascinating modern cutting-edge technology that is around us every day. Expect some ultimate family entertainment with a visit from the world-famous Titan the Robot and his comedic antics; take part in the Rocket Challenge, test your control skills on a Royal Navy mock-up flight deck plus so much more!

This show has everything to keep the whole family entertained. There will be a vast range of showground attractions from the latest defence technology exhibitions and service displays to trade stalls, arena displays, military bands and the chance to meet the pilots and even sit in the cockpit! For the thrill seekers, there will be simulators, fairground rides and helicopter pleasure flights to enjoy.

Further information and discounted advance tickets (Adult £28, Child U16 £5 and Child U5 Free) available at www.royalnavy.mod.uk/airday or over the phone on 0330 100 3656 until 12:00pm (midday) on Tuesday 9 July. Advance tickets with no £3 booking fee can be purchased over the counter at more than 50 Tourist Information Centres (TICs) across the region until 1700 on Friday 12 July (subject to availability). See our list of participating TICs at http://bit.ly/TicketAgents19.

Download our App here http://bit.ly/RNIAD19App or search for RNIAD in the App Store/Google Play.