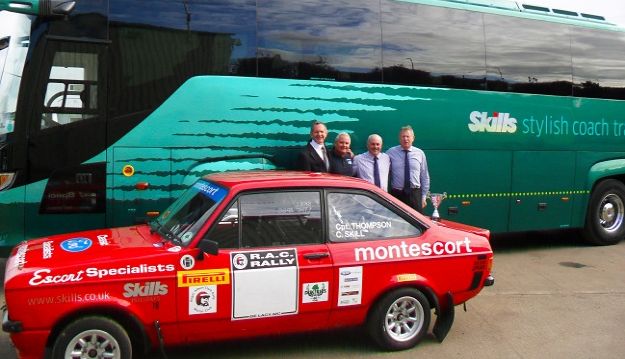 Chris, who turned 50 last Monday, was born and raised in Nottingham and grew up surrounded by engineers and motors in the family business.  He finished first in the D2 Class after 8 events which included a 200 mile, 3-day stage in the Isle of Man where he beat his closest rival by over 10 minutes.  Chris’ win was confirmed after the final Rally Yorkshire event on 24th September and his championship presentation will be in Chesterfield on 24th October.

Throughout the season, Chris’ Ford was sponsored by the local coach business which still bears his family name and is run by his two brothers, Nigel Skill and Simon Skill who are chairman and financial director respectively, along with Operations Director Pete Hallam.

Chris said, “This is my first full year of racing in the championship and to finish in first position is really something.  Thanks must go to my brothers and to Skills Coaches who continue to support me moving forward.”Skills Chairman Nigel Skill said about his brother: “I know everyone in the company is incredibly pleased that he has taken the Skills name forward to championship victory.  Chris, just like the business, is Nottingham born and bred and the whole city should be proud.

If anyone is interested in seeing Chris race, his next event will be the Dukeries Rally at Donington Park on 25th October.