Technicians bring T.Rex roaring back to life at Longleat 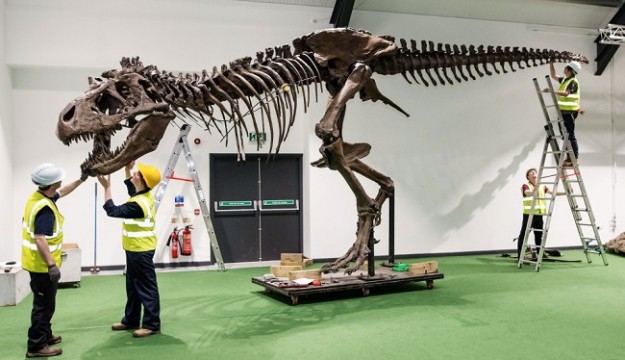 The team, working alongside Longleat staff, has assembled 17 individual dinosaurs, including a life-sized model and a skeleton of a tyrannosaurus rex as part of ‘T. rex: The Killer Question’ which opens to the public on Thursday, May 24th.

Set within its own themed environment in Longleat’s Longhouse the exhibition is divided into five scenes with visitors taking on the role of dinosaur detectives trying to answer the question of whether T. rex was a predator or a scavenger.

The Tyrannosaurus rex skeleton arrived at Longleat in nine different pieces and had to be craned into position and the full size T. rex model is 12 metres long and weighs 2.5 tonnes.

The new exhibition is part of the Predators season at Longleat which also features a series of animatronic scenes depicting some of the animal kingdom’s most successful hunters including polar bears, great white sharks, lions and eagles.

T. rex: The Killer Question runs from May 24th to September 3rd in the Longhouse at Longleat, Warminster, Wilts BA12 7NW.

Groups of 12+ can access exclusive perks such as 30% off Day Tickets, complimentary organiser tickets and driver tickets and lunch vouchers. For more information and to book visit  www.longleat.co.uk/groups or call 01985 844328.