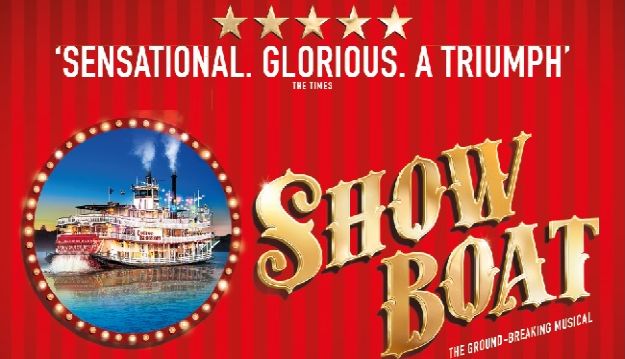 Daniel Evans’ five star production of Show Boat will transfer from Sheffield to the West End in the spring of 2016.  With booking opening today (12 February 2016), previews begin at the New London Theatre on 9 April 2016, with press night on Monday 25April 2016

With music by Jerome Kern and book and lyrics by Oscar Hammerstein II based on the novel Show Boat by Edna Ferber, Evans’ production of Show Boat is booking to 7 January 2017.  Designs are by Lez Brotherston with choreography by Alistair David, musical supervision and direction by David White, lighting by David Hersey, sound by Paul Groothuis and video design by Tim Reid.

Evans’ sell-out production opened at the Crucible in Sheffield on 10 December last year and after being hailed by audiences and critics alike extended booking to 23 January 2016.  Show Boat is produced in the West End by David Ian with Bob Bartner and Norman Tulchin.  Casting for this production will be announced shortly.

Daniel Evans said:  “Show Boat is often thought to be the mother of all musicals.  Hammerstein and Kern’s score continues to blow audiences away, almost 90 years later.  As well as being a riveting story, the piece’s themes of family and freedom still speak to us today in a profound way.  I feel proud that the production we made in Sheffield will now get to travel further afield and be experienced by yet more audiences in the capital.”

David Ian said:“I am absolutely thrilled, along with my co-producers Bob Bartner and Norman Tulchin, to be bringing Daniel’s ground breaking production of Show Boat to the West End.  As soon as I saw the production in Sheffield there was no doubt in my mind that we absolutely had to bring Show Boat in to London, giving West End audiences the opportunity to see this brand new version of such an incredible musical.”

One of the most romantic musicals of all time and set against the backdrop of America’s Deep South at the turn of the 20th Century, Show Boat tells a powerful story of freedom, loyalty and, above all love. Spanning 40 pivotal years in American history, this epic musical follows the lives and loves of three generations aboard the Cotton Blossom show boat as it plies the Mississippi River and features the timeless songs Ol’ Man River, Make Believe and Can’t Help Lovin’ Dat Man.

Multi award-winning Daniel Evans took over as Artistic Director of Sheffield Theatres in 2009 and in June this year he steps down to take over as Artistic Director of Chichester Festival Theatre.  As a director at Sheffield Theatres his productions include An Enemy of the People – the opening production of his inaugural season, Racing Demon as part of The David Hare Season, Othello, Macbeth, My Fair Lady, The Full Monty, This Is My Family, Oliver!, Anything Goes and The Effect.  As an actor, his work for the company includes Company, The Pride, Cloud Nine and The Tempest.  An award-winning actor and director, Evans’ work includes Sunday in the Park with George for the Menier Chocolate Factory, Wyndham’s Theatre and on Broadway – a role for which he won his second Olivier Award for Best Actor in a Musical and a Tony Award nomination.  His additional extensive credits include work with the Donmar Warehouse, Royal Shakespeare Company, Royal Court Theatre and National Theatre. Evans is a Fellow of the Guildhall School of Music and Drama.

This version of Show Boat was originally produced by Goodspeed Musicals and was adapted and directed by Rob Ruggiero and presented by special arrangement with R&H Theatricals Europe.  The show’s Broadway premiere was in 1927.